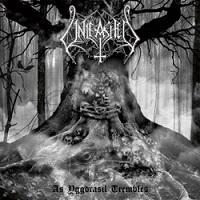 During my tape trading heydays of the late 80’s into early 90’s, a special feeling overwhelmed me at the prospect of discovering Swedish death metal. At first my mind struggled to handle the deeper growls and frenetic drum tempos, and yet I knew this would be a sub-genre adhering to the principles of the underground. No compromise, full on integrity, and an equal energy exchange from band to fan and back.

Unleashed became one of my early demo trades of the 90’s. I happily bought their debut album Shadows of the Deep and have watched their career ascend and stabilize. They are one of those acts that certainly have established a style and sound, making minor refinements in terms of either speed or doom as well as guitar

melody enhancement depending on the year and make of the group.

Onto this new 10th album then. As Yggdrasil Trembles finds vocalist/bassist Johnny Hedlund and his cohort band mates taking their accelerator slightly off in comparison to the furious, black metal tinged 2008 effort Hammer Battalion. Never fear, fellow death hounds, tracks like “So it Begins” and “Wir Kapitulieren Niemals” roar down the track at jet rocket propulsion, while the group also explore their slower doom thud dynamics with “Master of the Ancient Art.”

Fredrik Folkare can shred in his solos, yet always has that unique knack for building and descending the measures with a refrain-like note hook. Best examples for his traditional appeal includes “Courage Today, Victory Tomorrow” as well the epic 4:52 title track (especially in Unleashed terms, that could be two songs

Overall, Unleashed deliver the goods once again, living up to their veteran status and I believe have the added benefit of Johnny’s distinct, discernable growl at the helm of this ship.