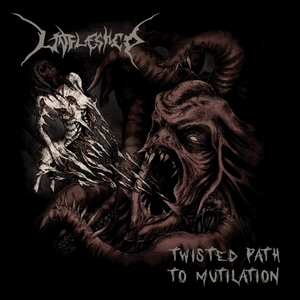 It’s taken twenty years, but Spanish death metal act Unfleshed finally release their first full-length album in the form of Twisted Path to Mutilation after an EP and split to their credit at the turn of the century. While it’s content to stick to the path of death and destruction, it’s purity is bound to gather plenty of the extreme metal faithful.

With an act that began right at the turn of the century, and releasing a first effort at the very tail end of 2020, Twisted Path to Mutilation comes off as a slight bit of worship towards Cannibal Corpse and Sinister. Not bad by any means, but the influences are very much tattered on the band’s sleeves when it comes to their sound. That said, compared to the usual onslaught of SweDeath clones or modern tech outfits that try to dizzy the listener with riff tornados, Unfleshed are a more welcome sight, even if they are somewhat familiar in tone. The sound is obviously brutal, but what’s notable is how the band can take that savage energy and still make rather enjoyable 5-6 minute tracks. There’s not a track that pops up that doesn’t provide some absolute punishment with killer riffs, and that’s really the band’s strongest suit. For being as overtly brutal as it is, it’s quite memorable. They have the songwriting aspect thoroughly polished up and it makes the tracks a real treat. To the degree that it never once comes across as stale with an over 40-minute runtime – something that could have been a death sentence to many bands of this ilk. The fact that they also included their original EP adds another 13 minutes (of which you can hear a distinctly different sound production-wise) without tedium setting in is really the highest praise one could give such a brutal band.

Unfleshed may have taken a while to get off of the starting line, but Twisted Path to Mutilation really nails all aspects about death metal. Some easy comparisons can be made to other ‘90s acts, but it never diminishes the excellent songwriting that the band displays, and their combination of killer riffs and hooks are sure to bring in plenty of eyes as they move forward.