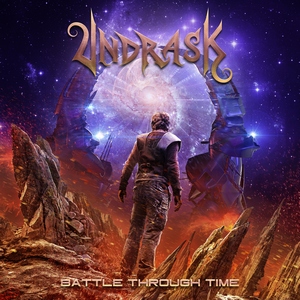 As often as the metal listening session finds itself to be this serious, stoic adventure, occasionally there comes a band that just gives you a grin from ear to ear. Not in a goofy way or by being overtly humorous, but hitting a sweet spot in their writing that is just a joy to listen to. Being exposed to Undrask about a year ago after finding their self-titled EP on Bandcamp, Battle Through Time is their first attempt at a full-length record. It’s also one that melodic death fans simply must check out.

Rolling back the timeline to an era when In Flames used to employ gorgeous twin guitar harmonies and took influence from Iron Maiden rather than KoRn, Undrask channels the essence of that magic and adds to it some meaty Amon Amarth-esque riffing and more modern progressive structures. The melodies and leads are some of the most smile-inducing this scribe has listened to in recent memory, with the right combination of catchy flavors and fist-pumping abrasion. One can have their pick of the tracks involved here, as you are bound to find at least one or two moments that will give you a most metal case of the warm fuzzies – particularly if you are a fan of the older, Gothenburg scene. They even provide something that you don’t normally hear with melodeath – some audible bass (see “Final Right”), which is a real credit to the act. There’s never a lull in the action, even on the lengthier tracks that round out the album, which makes it engrossing to the point where you’ll end up hitting repeat without a moment’s notice once the epic title track finishes.

While it does play to a familiar tune, there’s no denying the sheer infectiousness of Battle Through Time. If you long for a trip back into the times when melodic death was heralded for its usage of killer melodies instead of poppy choruses and modern synths, Undrask have served up an offering that you can’t refuse.