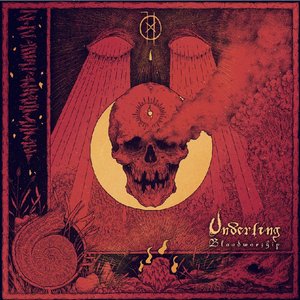 Underling’s Bloodworship has been floating around since last year, but there’s no better time to give it a fresh listen now that it is being re-released through Neuropa Records (alongside their equally killer debut EP, Breathe Deeply). The band contains members of some real strong acts, namely Fallujah, Arkaik, Battlecross, and Wrvth. It’s easy to see where some of the atmospheric tendencies come from with that in mind, but Underling easily distances itself from the aforementioned acts.

Though it’s been touted more as an atmospheric black metal album, Bloodworship isn’t quite so easy to categorize as such after you hear it. Sure, you can toss a “post” on the beginning of it and cover yourself, but elements of death metal and even some groove find their way into Underlings genre-mashing. “Clawing at the Rot” is just as abrasive as it is serene, with some almost post-hardcore sounds permeating between moments of stunning melodies, while “Blackout” has meaty, mid-tempo riffs that balance atmosphere in an almost Gojira-like way (you can hear this in “Downpour” as well). The pick of the bunch just might be the more laid-back “The Seventh Wall,” where a melodic opening (featuring female vocals) sets the stage for emotive riffs and a nice back-and-forth between screams/singing. But for those in need of something with more gusto, “Servant of Filth” should suit things just fine, with rumbling bass and some of the most headbangable riffs of the album (not to mention some quality blasts).

Though on paper it may seem like a smorgasbord of ideas, Bloodworship comes together in a fitting and distinct way. While it’s a bit too heavy to be lumped into the atmospheric black category (though that’s a great thing), the involved talent is sure to be enough to have people check into this one, and the mix of sounds and sweeping majesty will make sure they stick around.