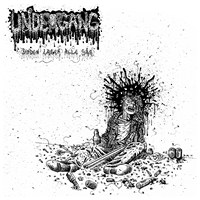 Ever truly wonder what rotting and putrefaction truly sounds like? Chances are you should investigate Undergang, whose third release, Døden Læger Alle Sår is practically festering. A minimal cover (with a surprising amount of white in the background – kudos on that) really gives you everything you might need to know about this one: chunky, filthy, and putrid.

Just listening to the guitar tone on this album reinforces what has been said in the opening paragraph. Undergang don’t use the clichéd Swedish approach to push their death metal ooze, they just drown the guitars in murk. Same thing goes for the ultra-low gurgles that are employed on a regular basis (not quite at the Demilich level, but getting there). They sound like the last bit of push you’d hear from a dying person slowly fading out. One can hear bits of the cavernous bellows of Incantation, the slow ploddings of early Obituary, and even some of the atmosphere employed by old school Finnish death metal. But somehow the band finds some room for some melodies as well. There’s a bit of rolling (or rotting if you prefer) groove to some tracks like “Gravrust” and “Dodsfald” that will peak the listener’s interest. Unfortunately, there are also some moments that end up with a bit of a lull – due to the ever-present layer of filth. Sometimes it can get overwhelming.

Despite some lulls from time to time, Undergang’s approach does hit a sweet spot that gives them some more individual identity than many that attempt to recreate the decay of the past. Those with a hankering for some filth within their death metal will certainly find themselves at ease here.