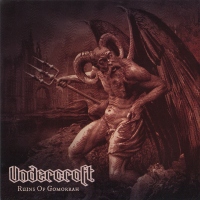 Had this one pegged as some kind of black metal offering, perhaps channeling Old Scratch and friends by way of general and generic tactics. That’s what will happen when you have a fella holding down a pitchfork on the cover, gussied up with some wings and horns. Satanic imagery is so played out. Yet, Chile’s Undercroft play an offshoot brand of jungle thrash, meaning they’re not too far off from mid-90’s Sepultura, which means they’re even closer to everyone’s favorite Sepultura/Soulfly clones Ektomorf, which means that their sixth album Ruins of Gomorrah is pretty much take it or leave it.

In spite of their geographical jumping from Chile to Stockholm in 2000, and eventually Stockholm to Hamburg, Germany (where they still reside), Undercroft’s sound is not limited to their surroundings. The riffs are simplistic and narrow-minded at best, while the vocals of Alvaro Lillo are grunted with the sort of sloppiness that resembles any number of skull-cap adorned 90’s metal castoffs. While they don’t stoop to the lows Ektomorf does in their Cavalera worship, Undercroft shows plenty of signs that they’ve spun Chaos A.D. a little too much, and it’s most noticeable on the clunky “At the Gardens of Hatred,” which takes the cake for one of the more dumb choruses to hit this year.

It appears that the band has simply out-chugged themselves across the album’s 10 songs. While there’s the occasional sparkle of excitement

on “Dead Human Flesh” and the closing solo on “Black Magik Witches,” the album as a whole lacks any sort of exotic flavors to keep it out of bland doldrums. Combine that with a dearth of melody and what you have is something that is several steps down from the real thing (read: Sepultura), with little or no appeal to anyone elsewhere.