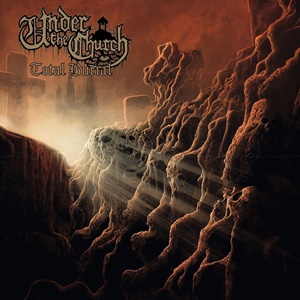 Swedish quintet Under the Church is a death metal unit intent on delivering old school, crushing tracks through their latest EP Total Burial. Consisting of members with past and present ties to acts like Merciless, General Surgery, Nirvana 2002, and Kontinuum, these musicians have a long history playing in extreme genres. It’s not exactly surprising to hear them churn out five quick hitting cuts that rival the energy, angst, and unwavering attitude that put this genre from the underground into the hearts of a legion of metalheads during the 1990’s.

Between the buzzsaw guitars, vicious and raspy vocals, hard hitting and relentless tempos, and the HM-2 pedal getting a workout, there’s rarely a moment that let’s up in this quick 15-minute affair. “Day of Reckoning” roars out of the gate, the mid-tempo stop/start transition and little guitar accents perfect to provide small aural earworms against the savagery present for the main riff/drumming combinations. Doom-oriented crunch and slower tremolo picking match the melancholy and screams/roars for the title track – older Entombed and Grave followers will revel in this track, the slower and measured lead part very tasteful. D-beat/punk angles intertwining Motörhead attitude next to Dismember-ish twists allow “Depraved Vocation” to be a favorite, Erik Wallin and Marcus Klack as guitarists filling the sonic landscape with licks and tricks that set ears abuzz to make heads whirl in approval. The occasional use of echo/reverb next to the lower growls and penetrating screams from Erik Sahlström makes “Just Another Death” another winner, the wah-wah bends taking early Metallica/Slayer to that evil next generation level.

Add in a killer band logo and ominous, underworld cover art and it’s plainly clear Under the Church isn’t aiming to rewrite the OSSDM textbooks – just add their own story to the current crop of artists that wish to create new music. Four years removed from their last album Total Burial is an ideal palate cleanser while the hordes await the next full-length.