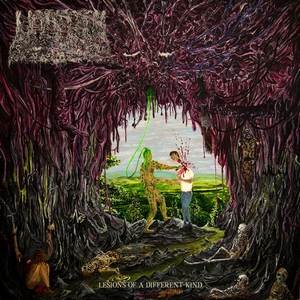 Somewhere along the way, death metal became contaminated by its own extremity. The need to make things more technical, more extreme, more brutal. It lost some of its primal edge. Thus, a more primitive and old school way of death metal has been popping up again in recent years to reclaim its filthy origins. You can add Undeath to that favored list of acts championing death metal in its retro glory.

The first thing that stands out about Lesions of a Different Kind is how grimy and disgusting the guitar tone is. It truly sounds like death warmed over. Thoroughly murky, but with a suiting production that doesn’t bury everything in the mud, so to speak. There’s no real need to hit the gas pedal and blast away at 300bpm either, this is a more calculated affair that wants to drown you in heaviness rather than speed. So much of the time it rages along at more mid-tempo stuff, allowing the right amount of grooves to provide a quasi-melodic touch – “Entranced by the Pendulum” is full of chunky grooves and interesting riffs that are bound to get your head moving. Other songs like “Lord of the Grave” prefer to toss some slower and plodding riffs and contrast them with some moments of higher speed to keep the listener on their toes. One of the album’s more raging tracks, “Chained to a Reeking Rotted Body,” takes advantage of some faster speeds at times and feels almost unhinged in doing so – there’s a distinct urgency that is developed that then sticks around as the track decreases things into groovier territory. Despite a certain consistency to the album, your returns to it will yield results as some of the riffs become more infectious and sink in without abandoning that gritty atmosphere the band wallows in.

Disgusting and brutal in just the right ways, Undeath are sure to become underground favorites with Lesions of a Different Kind. Bestial and raw death metal that manages to keep things groovy enough to bring you back for more.