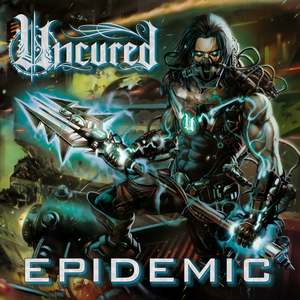 With a mix of genres that thrust Uncured into the modern end of the metal pool, it’s not to say that they aren’t trying their best to try to shake things up. What’s most surprising is how well all of these different components blend together and give the band a feeling that’s both comfortable and somewhat familiar while they attempt to stretch some boundaries. Epidemic shows promise, even if a few rough edges could still be sanded down.

Taking djent-y grooves, progressive riffing, and a bit of the direct heaviness of deathcore, Uncured set out to veer from the norm on many occasions. There’s some genuine surprise when the band decides to flip things on their head with the album’s third track in “Conquistador.” After the more direct attacks of the opening duo of “Choke” and “Desecration” (though the latter has a stunning melodic solo), “Conquistador” opens with some slower yet thick grooves only to pull the rug out further with some acoustic riffing and some campfire-esque clean vocals in the middle. It’s a bit jarring in the transition back into something more deathly (and the more hardcore-ish barked vocals) but enjoyable none the less. Cleans come to the surface again (“Death Valley” and “Nothing but Disease”) and they are a solid addition to the band. Other songs like “Stone Fortress” and “Eradicate” also show a tendency to attempt merging more melodic moments and bludgeoning forces, and employ catchy progressive melodies alongside more groovy and sometimes ‘core-ish riffing.

Though some of the transitions feel a little jagged in tone, Epidemic succeeds much more often in the end. The progressive moments make the album more interesting, while the ‘core-ish components help to keep the album moving and potentially more brutal than it would be otherwise. Next time around should hopefully present even more maturity in songwriting, but for now Epidemic is a look if you want something modern and heavy in execution.