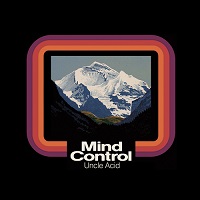 The classic/occult/doom revival scene is alive and well in the wake of the last few years of Witchcraft, Graveyard, and The Devil’s Blood coming in, making their marks, and moving on or imploding outright. Any trend brings with it a number of high quality acts and a few thousand piss-poor imitations and this retro-focused scene has been no exception, but here on Mind Control the curiously named British group fuse primordial doom with the utmost of acid-soaked psychedelia to create an album that is at once immediate and surprisingly amiable to repeat listens.

Sabbathisms run rampant across many of the album’s highlight tracks “Death Valley Blues” and opener “Mt. Abraxas,” the former however fused with a melodic core that is hard to pull the ears away from. Uncle Acid’s nasally vocals in particular are a treat, sounding as something pulled directly out of the heart of 1968 and never riding over the instrumentation.

The last portion of the album pulls back to the focus and sees the ritualistic push for psychedelia take center stage as “Follow the Leader” drones without a particular destination (and that’s not a bad thing, mind you) and ‘Devil’s Work” flows from focus to a long and distant fade out, sealing the mind in a state of numbness the band likely intended all along. A set of eyerolls may be the first reaction many have to the prospect of another band pushing this sound, but they couldn’t be further from the truth. Settle in and give it a listen, you’re apt to be surprised.