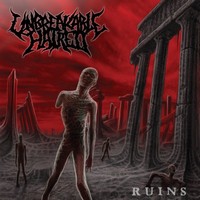 Wasn’t really feeling the cover art on this one, but pushed forwards based upon some of the praise the band had been receiving from members of Suffocation, Cryptopsy, Misery Index, and more. Sometimes the hype train isn’t all it was built up to be, but Unbreakable Hatred hasn’t seen much since (in comparison to some of UL’s other summer releases) – sad since Ruins is some pretty deserving and rad death metal.

Hailing from Quebec City, the Canadian tradition of technical proficiency runs deep within Unbreakable Hatred. There’s a bit of a Cryptopsy feel to some of the speedy and complicated riffing that takes up a good chunk of the disc. But what gives the band an edge is that they offer more than sheer wankery to get their point across. In addition to the intricate and clever riffing, they toss some Dying Fetus-esque groove to give things some balance. There’s never really any ‘stomping’ per say, but slowdown that comes every once in a while gives some needed variability. There’s a natural flow between moments of groove and the otherwise chaotic material, which proves the band is going for songwriting instead of being showy. To choose a track, “Unpredictable Brutality” sums up the UH experience pretty well (literally and figuratively) – varying between blistering technical riffage and addictive grooves that are of equal entertainment. With only 8 tracks that get-in and get-out in the 3-4 minute range, they also know how to make a point without overstaying their welcome, which is always advantageous with technically driven death metal.

Ruins is only Unbreakable Hatred’s second release to date, but they are already playing with plenty of skill and conviction. They’ve fine-tuned their angle and approach, and it seems quite clear that the third time could really be the charm here and put them all over the map if they continue to progress at this rate.