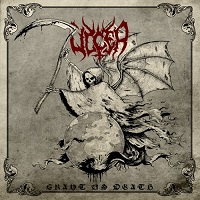 It takes six men to play death metal in Ulcer. This “strength in numbers” attempt would suggest there’s a lot more to the band’s grisly grind, but let us not be fooled – this is straight-up, no-frills death metal. Of course, it all goes back to Scream Bloody Gore and Severed Survival, two albums the Poles probably have posterized on their practice space walls. So, for an early entrant into the 2013 throwback death metal rat race, Ulcer find themselves a few paces off the front, which in laymen’s terms means they’re in the peloton with a thousand other like-minded bands.

In an unfortunate bout, the album telegraphs itself almost immediately once the pro-Swede guitar tone of the title track make their way in. Sawed-off and frazzled, it’s pretty much the same tone we’ve been hearing from this style for a while now. Too bad Uffe Cenderlund didn’t copyright it; dude would have been rich, more rich than in the album insert pictures for Too Shoot…Ride Straight and Speak the Truth, which is when Entombed were seen boarding a plane with their name emblazed on the side. Entombed, on a plane? There are planes in death metal?

Us getting so far off track is emblematic of how cookie-cutter Grant Us Death is. Perhaps the powers-that-be were thinking that a Polish twist on retro death metal would be the capper, but it’s not. Polish twist…sounds like the newest dance craze. (Still off track…not getting back on, either).