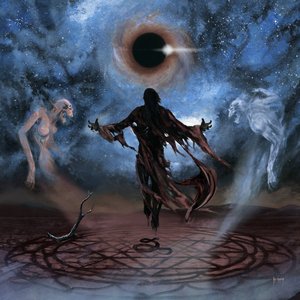 In truth, Djinn’s announcement earlier in the year set it up as one of my most anticipated releases of 2020. This, despite both the generally low bar set by the 2020 experience and Uada’s somewhat uneven discography. I considered Devoid of Light an extremely strong release and Cult of a Dying Sun significantly less so, though for the longest time I could never really identify why. The why, as it turns out, came after my casual introduction to a band that dissolved before Uada’s creation: Ceremonial Castings. Dense is foremost among descriptors I’d use for the albums I encountered and, in the end, density, sometimes aimlessly so, is what I think kept me from ever becoming fully engaged with Cult of a Dying Sun.

Djinn, despite featuring fewer songs (six) and being a longer work, is an incredibly rich and balanced listening experience. I had sizable expectations and the band has crushed them all with Djinn.

That is not to mischaracterize the album as an easy listen – it requires your attention from beginning to end. Density remains at the forefront in the songwriting, these are large, complex pieces of work – the initial single, the eponymous “Djinn”, is an elaborate work of churning melo-black. Upon first listen I was admittedly taken aback by the song, not by its melodic focus, but in how absurdly bright, even upbeat, it sounds. In juxtaposing its melodic hook with familiar blackened passages, the song melts by far quicker than its near 8-minute run time might suggest.

Indeed, that’s an element shared throughout the album – “The Great Mirage” portrays markedly different experiences in its first and second halves, the latter of which features a scorching set of guitar solos that would have fit right in with Devoid of Light. While I initially approached the tracklist with some trepidation – not just one but two songs that bump up against the 14 minute mark – they offer experiences that while similarly constructed, play out very differently. Closer “Between Two Worlds” lives its title, a ferocious melo-black experience for 8 minutes followed by an escalating path of transcendence across its final few. “No Place Here” is not dissimilar for most of its work, though it closes in a much more ritualistic fashion. My personal favorite, both for its mastery of melodic black metal tenets and its focus is “In the Absence of Matter”, which is a radiant, beautiful take on scorched earth tactics. To borrow from old websites, it is positively blistering.

Again, Djinn is not an easy listen. While monstrous sounding (“Djinn” shakes my desk every time), there is a lot going on at any given time and accordingly, it may take a few listens to settle in for some listeners. Whatever peculiar groupings the internet has associated Uada with in the past, they are certainly walking a path that is wholly their own here and sharing little, if anything, in common with their geographic peers (for those disinclined to the Cascadian sound, worry not, it is not here). Great expectations met and indeed surpassed, Djinn is for me easily one of the biggest surprises of the year, even with its considerable hype.