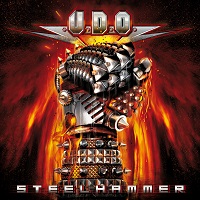 Prior to the recording of this album, Teutonic traditional metal act U.D.O. faced the unenviable task of replacing not one, but both guitarists. Main Accept compatriot Stefan Kaufmann stepped down due to chronic back issues, but long-term guitarist Igor Gianola quit just as studio sessions began for Steelhammer. Yet vocalist Udo Dirkschneider didn’t worry – he just shifted the focus of songwriting and production onto himself and bassist Fitty Wienhold, allowed new guitarist Andrey Smirov to record all the guitars and recruit second guitarist Kasperi Heikkinen to complete the younger, latest U.D.O. incarnation.

As such, Steelhammer proves you can look at the past to create a bright future. Udo felt the musicians needed to be back together recording face to face in the studio- and this creates a potent, lean tone that’s part modern, yet 100% metal. The anthem template allows tracks like “Devil’s Bite” (love the 80’s arcade keyboard intro), first single “Metal Machine” (complete with a slower “Immigrant Song” main riff/ groove), and the addictive opening title cut to win listeners over right from the get go.

Variety has always been a mainstay on U.D.O. studio albums, and within its 14 songs this record doesn’t disappoint. Faster cuts like “Basta Ya” (a Spanish language track that possesses a love of Restless and Wild energy) and double bass monster “Death Ride” sit nicely against more melodic hard rock efforts such as “Never Cross My Way” and “When Love Becomes a Lie.” Udo’s patented sneer, snarl, and screaming lung capacity continues to thrive even as he enters his early 60’s – with the topics of government corruption, personal belief, and never taking life for granted always heavy and engaging to the fan base.

Sure, there are a couple of less than adequate tracks (the ballad “Heavy Rain” a little too Beatles-esque for my tastes, and “Book of Faith” as a closer is even worse), but the 12 remaining tracks engage my ears in such a way to represent the best U.D.O. album since Holy for certain. Now back with U.S. management, expect U.D.O. to regain a foothold in North America and continue to give metal fans the desired thirst for classic, traditional offerings.