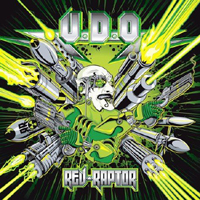 For obvious reasons, many are curious to see how Rev-Raptor is going to match up against Accept’s Blood of the Nations. It’s U.D.O. verses Wolf Hoffman in a battle of who really was the brains behind Accept, which at this point, has long been determined as the bald-plated Hoffman. In the case of U.D.O. Dirkschneider, the diminutive, camo-clad frontman has been happily trolling along with his solo band, with the oddly-named Rev-Raptor being the band’s 13th (!) studio album.

While not having the muscle of Accept (there’s this weird, processed sound to the album that takes it down a few notches), there’s plenty of songwriting wherewithal, especially on the Judas Priest-infused “Laid To Rest,” which boats a hearty, raspy chorus from U.D.O. “I Give As Good As I Get” is one of those smoke-filled ballads that display the tender side of U.D.O., with some nice choral arrangements to (combat) boot.

Naturally, Accept is poached on “Rock ‘N Roll Soldiers,” which has the same swing and feel as “Balls To the Wall.” Nicely done. Yet if you’re looking for finesse or panache, stay away from “Terrorvision,” “Pain Main,” and “True Born Winners,” a trio of songs that reek of cheesy bravado and over-done lyrical themes. Then again, this is what, U.D.O’s 80th album? Something like that…the man still sounds vicious, however.

Based on name recognition alone, U.D.O. is still going to get some hits and yes, he’s still the “Voice of Accept,” regardless of the surprising success of his replacement Mark Tornillo. So is Rev-Raptor better that the overrated Blood of the Nations? Let’s call it a draw, only because Rev-Raptor is a ridiculous title and “London Leather Boys” is only good when Dirkschneider sings it.