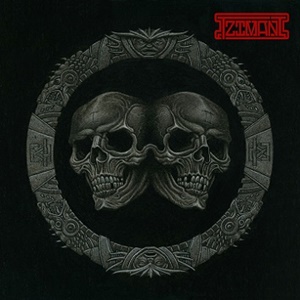 Alive from San Diego, California, Tzimani started last year and consists as a duo of brothers in the studio (obviously expanding in a live setting) with the mission of developing catchy riffs, easy on the ear choruses, and energetic soloing that brings about the best in traditional metal and melodic hard rock. Eddie Vazquez handles the vocals, guitars and bass, while Sebastian Vazquez executes the drums – and this self-titled EP release contains five songs plus a brief 30 second “Shift” intro that embraces focused songwriting while wasting no time delivering addictive riffs, passionate melodies, and a general good-time vibe that assures maximum headbanging antics will ensue.

You can sense a strong California vibe in terms of Eddie’s favored guitar approach – often starting out material in simplified runs before turning on the power chord charm, as “Final Hour” contains tradeoffs between the two with a slight progressive edge that brings about Leatherwolf meets Armored Saint textures, the solo a real treat through its shredding activities. Sebastian easily shifts between groovier passages and faster paces right out of the gate for “Overdrive”, never overplaying but properly emphasizing the power and glory of metal by placing accents in the right areas of the arrangement. Eddie as a singer has a subdued presence, using more of his lower to mid-range register effectively, but occasionally can unleash that upper note hit or harmonization, most evident on the Maiden-esque “We Are the Ones”, filled to the brim with twin guitar action. A penchant for Sunset Strip, bluesy-oriented crunch comes up on the closer “Get Me Out of Here” – the main verse melody and highway-cruising riff very Mötley Crüe-oriented, while the closing upper register scream and guitar flurries bring it back to the metal.

Considering the relative short time together as Tzimani, it’s easy to gauge the band’s great instincts when it comes to songwriting, performance, and execution. They have all the tools to get the beer flowing and the fists flying high, and that’s the name of the game to building an audience in the metal landscape.