Tysondog – Midnight (From the Vaults) 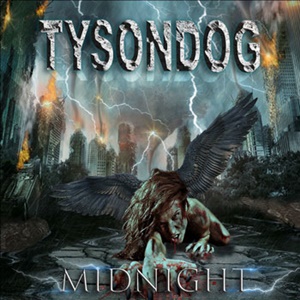 Avid cult listeners to the New Wave of British Heavy Metal movement probably remember this UK act Tysondog for their two albums on Neat Records, 1984’s Beware of the Dog and 1986’s follow-up Crimes of Insanity. Parting ways a year later, they would resurrect themselves in 2008, releasing their third album Cry Havoc in 2015 on Rocksector Records which brings us to this latest album Midnight on Danish label From the Vaults. Three-fifths of that classic lineup still appears, raising credibility on these musicians continuing for the right reasons (creativity, passion, legacy).

The purity and street-level atmosphere contained in these nine tracks illustrates the timeless quality to traditional heavy metal, even when there are facets of power, speed, or doom accents thrown into the mix. You hear a potent mid-range rich in character twists plus an abundance of piercing attitude with singer John Clutch Carrothers, who may not soar to the eagle heights of his early days, but through songs like “Cold Day in Hell” and “It Lives” chooses to flex more of a clearer Udo-like bite to the proceedings. The repetitious, simplistic nature of the main riff and monotone chorus for “Hellbound” with a very basic snare/kick groove drives this song quickly into nails on a chalkboard territory – and not for the better. Atmospheric nuances and proper anticipation momentum tricks make “Battalion” an impressive opener – the chugging rhythms, counterpoint gear shift, and energetic double kick foundation has similar qualities to the latest work of Diamond Head or Saxon. Calmer licks from Stevie Morrison and Paul Burdis unfold for “Waiting for God”, the bluesy lead break enveloped around Black Sabbath/Candlemass-like parts, John choosing to stretch out in his lower register throughout the verses.

It’s a mixed bag for Midnight in terms of long-term appeal. Certain songs contain the right fist-banging passages and stirring melodies to meet approval – other tracks fall flat as they could have delivered more in terms of energy, diversity, or that extra discerning / critical factor before hitting the studio. Approach cautiously and accordingly – Tysondog aren’t veering from the roots of 80’s UK metal, so at least give them credit for sticking to their guns.