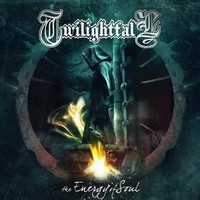 Lots of good stuff coming out of Ukraine in the last decade, and here is yet another addition to the stockpile over at Svarga Music in Twilightfall, with their debut album The Energy of Soul. Now, I’m fairly certain that the title is merely awkwardly worded due to a difference in the usage of articles (or lack thereof) between our languages. No, this is not James Brown inspired Soul, but a mixed-bag serving of some very well-played heavy metal.

As you’d observe in listening, the musicianship in Twilightfall is great, given to the fact that these guys have been around a time or two. Comprised of ex-members of Nokturnal Mortum, including a drummer who also currently drums for Ygg (another fine pagan black metal outfit), Twilightfall draws from 40 years of metal influences, the lion’s share being early melodic thrash a la Ride The Lightning-era Metallica, and the melodic blackness of Dissection. Peppered with some notes of Scandinavian melodeath and perhaps some older Blue Oyster Cult kind of vibes, the release is a bit scatterbrained with generous servings of melodic meandering. Now, for better or worse (likely better) the musical metal mashing herein can be a touch unsure of what it is supposed to be, yet Twilightfall are unconcerned with such things and just deliver riff after riff, section by section of monstrously melodic metal. The best part is that it’s all done so well.

Aside from the lead guitar (which is the main engine here), we have commanding drum work setting out midtempo rhythms, fine bass and rhythm guitar playing, harsh yet clear vocal work, and probably the differentiator being the keys/synth which are used in good taste – subtle enough to enrich the atmosphere yet out there enough to, well, stand out from the others in the…erm…genre.

Truly a varied and enjoyable work of metal disciples-to-the-bone, The Energy of Soul is a very strong debut for these Ukrainians. Anyone into the aforementioned bands will find something to enjoy in here…if you didn’t, what the hell kind of metalhead would you be?