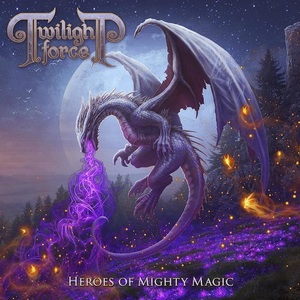 When it comes to power metal (or any metal type really), everyone has perceived stereotypes. So if you are going to play into those stereotypes, you might as well go at it 110% and just do it as over-the-top as you can. Such is the approach that Twilight Force has taken, and Heroes of Mighty Magic is all the better for it.

Fantasy-soaked lyrical content, bombastic synths, high-octane vocals, and galloping guitarwork all embody the spirit of power metal and Twilight Force pull them off with extraordinary precision. Some nods to bands like Dragonforce and Rhapsody (and perhaps even Disney – check out “Rise of a Hero”) are in order, but really it’s just the blueprint for making power metal with just the right amount of cheese. Despite being triumphantly built with synths that frequently take centerstage and vocals that soar and elevate into rich choirs at points, the guitars still manage to fight their way into the mix, providing some real show-stopping shred and intriguing melodies, and at times melding with the orchestral pieces to design something that feels fun and addictive, even on lengthier numbers such as “There and Back Again” and the title track. Some momentum is lost at the end with a 6-minute closing “Epilogue” (which still effectively closes out the album’s story) but outside of that, expect more than your fair share of happy melodies and energetic riffs.

Full of happy melodies that aren’t afraid to acknowledge their inherent cheese and having the musical prowess to back them up, Heroes of Mighty Magic is sure to ensnare much of the power metal community. While some may have some trouble getting past the over-the-top approach, others will simply relish it. Based upon the buzz being built around the act presently, it’s safe to say that their excitement for the genre and fun approach will pull even more towards them as they continue onwards.