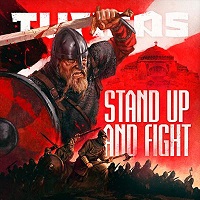 In what clearly is a concerted effort to not sound like their contemporaries, Pagan/epic/folk metallers Turisas have turned this long stagnant sound upside down on Stand Up And Fight, sounding more like a Broadway production than an album ready to be thrust into battle. No one will salute this more than Blistering, but Turisas are clearly in over their heads with this one…it sounds like the ill-begotten combo of pro wrestling theme music and Crash Test Dummies (the band, that is).

Per the above item, Turisas have done away with most of the hard-charging subgenre staples of this arena, probably because they can’t hang with the Ensiferums and Eluveities of the world. While this is very much true (bothbands

destroy Turisas), the Finns should be credited for at least trying to spice up this sound via an assortment of brash orchestration, powerful narration, and the occasional heroic moment. The rest, however, is disposable pap.

Mathias “Warlord” Nygård brings the whole operation down with his goofy clean vocals, sounding like the dude from the aforementioned Crash Test Dummies when he pulls out the baritone portion of his voice. He does this frequently on “Take the Day!” which would be great theme music for a pro wrestler, while the goofy “Hunting Pirates” is a poor attempt at a mead hall sing-along. The songs that do have any type of muscle (i.e. the title track, “End of An Empire”) are often without any real hooks, relying on Nygård to pick up the slack when he clearly can’t.

At this juncture, it’s becoming quite difficult to take Pagan/epic/folk metal more seriously, and Turisas has done the style a tremendous disservice on Stand Up And Fight. It’s not like the band were a force to be reckoned with before (they weren’t), but this is the kind of album that elicits more than a few scratches to the noggin’…it’s that laughable. If there is a low-point for all things epic metal-related, this very well could be it.