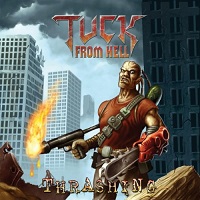 Ask any red-blooded American what they think of when they hear the word “tuck” and they’ll associate it with the infamous “Tuck Rule” from the NFL. Our Matt Coe would know more than anyone, as it was the Tuck Rule that allowed his beloved New England Patriots to advance to the Super Bowl in 2001, all because of how the NFL perceives the laws of physics and how a quarterback’s arm going forward doesn’t mean he’s going to throw it. There’s our football rant for the year…

In the case of the oddly-named Tuck From Hell, thrash is king (really?), and on their Thrashing debut, the Swedes kick out a barrage of awfully cliché, but fun and vibrant thrash metal songs

. There’s no depth to this thing whatsoever, as evidenced by “Death Before Disco,” a song that drops several thrash-related album and songtitles. Singer Niclas Ingels comes across as a more hardened version of Susperia’s Cyrus and is able to pull of the necessary attitude on not-so serious songs like “Italian Stallion” and “Tequila Race.”

If we were going to draw any real comparisons, it would be to modern Testament, minus the high-wired extremity, along with Euro thrashers Tankard and Sodom. This is mostly polka-beats to the floor, crunch-tastic riffs, all of which result in harmless and fun songs such as the ultra-crunchy “I, Hillbilly” and “King of Thrash.”

There is a clear line between stuff like this, and the retro thrash movement. Tuck From Hell isn’t as much as revisionists as they are thrash devotees, while on the flipside, the retro thrash movement will borrow a riff without second thought. At face-value, Thrashing is a simple-minded, top gear kind of album that probably won’t set the thrash world on fire, but it’s just good times across the board…for under 30 minutes.