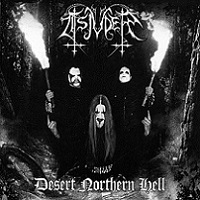 The refinement of the Norwegian second-wave sound hit its climax around the time this album was originally released in 2004. 1349 found itself laying waste to absolutely everything in sight, Immortal had released Sons of Northern Darkness in 2002, and Gorgoroth gave one of the best lead-off tracks ever with “Procreating Satan” (…in retrospect, the only long-term worthwhile song from Twilight of the Idols). Behind them all in name but lording above them in quality, Tsjuder released Desert Northern Hell, perhaps the finest and most furious example of black metal done in the Norwegian style. It’s harsh, relentless, and absolutely devastating from beginning to end.

That, however, is not the reason for the score. Desert Northern Hell itself is still an amazing release to listen to, a visceral experience that destroys everything it touches and still warrants all the critical acclaim it received upon initial release (and thus its content is not covered here). As reissues go though, this one is a kind of mixed bag, featuring four live bonus tracks attached to the end of the album and the inclusion of 2006 live DVD Norwegian Apocalypse.

The sound on the live tracks leaves something to be desired, the bass often bleeding out over everything else and creating something of a sonic mess. The feeling of each track comes across well enough (“Beyond The Grave” being the easy standout), but the inclusion is nevertheless a questionable one, why bother with these? The DVD was not included with my review promo, but having watched it elsewhere, it’s a much more befitting display of the band in a live setting, sonically or otherwise, they come across as the powerhouse they are. Your mileage with this release will vary based entirely upon your history with the band. If you already own Desert Northern Hell and Norwegian Apocalypse there’s little to see here. If you’re curious though and own neither, it’s honestly kind of hard to go wrong with it.