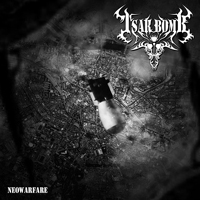 Named after the “Tsar Bomba,” the most powerful nuclear weapon ever detonated, Spain’s Tsar Bomb evoke all sorts of wicked, death metal-friendly clichés on their Neowarfare debut. One could get a lot of mileage out of sayings like “This album will drop on the scene like an atomic bomb!” Or, “Tsar Bomb…is ready to explode!” Fortunately for this trio, Neowarfare is a surprisingly punishing and all-out extreme display of death metal. So yeah, Tsar Bomb is ready to detonate. Look out! (Naturally, there are several samples of bombs exploding and warfare…go figure.)

The closest comparison here is Krisiun, for obvious reasons. Tsar Bomb operates in much the same manner as the Brazilians, relying heavily upon the outlandish and obtuse riffing abilities of Ivan, who serves in the role of Moises Camargo here, while some marvelously-produced drum programming goes off for several blast-a-thons at a time. Actually, this is probably one of the better drum programming jobs in recent memory, with a nary trait of inhuman elements. Someone get these guys a full-time job as programmers.

Lots of cuts to get down with, particularly “Victorious Death,” which manages to retain a sort of clarity and texture rarely found in this area of death metal. A lot of this can be attributed to the aforementioned Ivan, who has a throng of riffs that would sit well on a Zyklon album, only more inspired, like on “Ashes of My Enemies,” a song that revels in brash technicality, set to the tune of Behemoth-like vocals.

A surprise if there ever was one, Tsar Bomb is able to move past the inescapable cliches their name and approach will attract. Nevermind those; Neowarfare has plenty of attack and bite, resorting to a brand of controlled chaos that could very well make them their country’s answer to Krisiun.