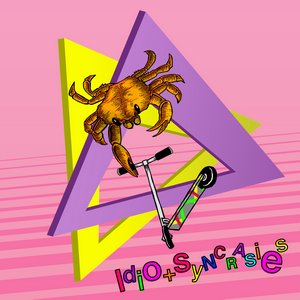 Sometimes you hear music that’s so out there and strange that the only logical response is to scratch your head and say, “What the fuck?” It’s not a bad reaction (for some at least), and it’s always nice to hear something that strays outside the norm. Acts like Mr. Bungle and Frank Zappa have inspired a number of metal acts, but Troldhaugen may take the cake here, with eccentric offerings that dip into the absurd and irreverent with glee.

What makes Idio+syncrasies work though, is the band’s sense of humor. With music that rapidly changes in sound and genre, the eclectic humor that runs through it is often silly and it works. There were a number of moments that offered a chuckle, either due to their absurdity or goofiness (or both). Songs of genetic engineering (“CRISPr Me Baby One More Time”), chicken politicians (“Poultrytician”), or simply a robot riding a bike (“BMX Terminator”) offer plenty of fodder for the band’s widely swinging sounds. They drop you right into the mix of it immediately too, with “I Ordered a Taxi Driver Not a Taxidermy” introducing robotic speech, dance beats, sound effect-laden guitar solos, and more to complement some heavy grooves and stop/start riffing.

But if you can dig it, the rest of the album will have you grinning from ear to ear. From supremely catchy melodies (“It’s Morphine Time”) to some darker grooves (“Jaw Drop”) to more carnival-esque riffing and atmosphere of “Mambo Mambo (Binko Banko”), the one thing you can count on is that you will be kept on your toes until it’s over. Outside of the oddities, it’s musically impressive all around, from intricate riffing and drumming patterns, to funky bass lines. The manic vocals will probably catch the most attention though – giving even the strangest moments some hooky power that will probably stick in your head, no matter how hard you try to fight it. And at thirty-seven minutes, Troldhougen also understand that it’s better to leave with momentum. There’s so much packed into the timespan that you won’t mind going back through just to hear what you may have missed out on before.

It may be silly and completely over the top, but Idio+syncrasies is a unique experience that you’ll either love or hate. A litmus test for how much eccentricity you can handle, but for those who revel in quirky and outside of the box, Troldhaugen have made something special.