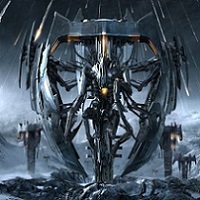 Finding a unique voice within any world, be it metal or otherwise, is often touted as a goal but rarely sought by bands (…or appreciated by those who do). The seeming eternal search for a voice to call their own continues to haunt Trivium, now a decade into their existence and still struggling to emerge from the shadow of their Metallica/Iron Maiden-chasing The Crusade days. They’re not really any closer to finding that voice on Vengeance Falls but the tried-and-true welding of melody and thrashy tendencies continues to serve the band well.

Even if the cover art is fucking awful. Because it is.

A major step up from 2011’s dull In Waves but a few notches beneath career high-point Shogun (it was stellar, decriers be damned), Vengeance Falls is serviceable if nothing else. Across its 10 tracks the listener will find the sing-songy combined with familiar metalcore leanings “Vengeance Falls” and “Through Bloood and Dirt and Bone.” Some focus more on one than the other, as in the thrashish centric “No Way To Heal,” while still being privy to soaring choruses and breaks, while on the other hand, “To Believe” leans almost exclusively on pushing searing melodicism.

The downside is that all of the tracks other than the closing two sit around 4 minutes and all follow similar patterns, eventually bleeding together if the listener doesn’t pay close attention. Perhaps it comes back to the abysmal cover art choice and the lack of voice, the band continues to seek too many voices at once and as a result winds up being at times a bland in between, a joy to none and a burden to most.

You could certainly do worse, but with as stacked as this year has been and especially this season, you could certainly do better. Vengeance Falls will pass pleasantly through one ear and out the other and hours after it has gone it’s as though the listener had never indulged it at all.