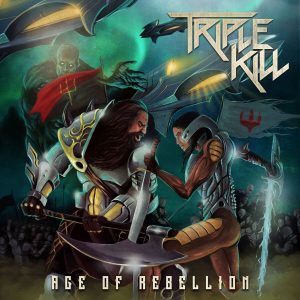 Consistency is the name of the game in metal these days. Frequency helps through live presence, social media awareness, and hopefully strong product in the form of new music. Melbourne, Australia’s Triple Kill understand this philosophy – since their 2016 inception, they’ve already got a six-song EP The First Kill and this full-length follow-up Age of Rebellion out to the public. Strike while the iron is hot, eh? Fortunately for the consumers, this quintet has a potent display of heavy/power metal on their hands, galvanizing the troops with a steady diet of stirring riffs and rebel-rousing melodies that go down a storm in small bars or larger festival gatherings.

The band isn’t afraid to inject a bit of modern power groove and finesse to the proceedings – without sacrificing the power/heavy metal intent. You can check into the staccato crunch transition during “Lords of Cinder” for instance and think of Trivium/Machine Head, but the comforting clean delivery from vocalist Rodney Goolagong gives the arrangement a bit of a throwback, classic nuance. The layers of sonic output on both the musical and vocal front assure the listener little chance for boredom – gang vocals, maniacal background screams, jackhammer rhythms, and slamming rhythm section action puts “Decay” and the follow-up “Fear the Old Blood” into bursts of speed/thrash glory – when bands like Cyclone Temple and Flotsam & Jetsam meant the world to certain listeners, adding in that Nevermore/Machine Head groove factor to gain maximum headcrushing impact. Expect some exemplary lead breaks with use of wah wah pedals and fleet fingers setting the fretboards on fire for Anthony Commane, and a bass solo from Efun White to open “Forward unto Hell” that has cultural potency as if Triple Kill leads the charge into battle, armed and ready to take on all comers. The computer animation cover has multi-dimensional elements to take in, sort of a futuristic sci-fi/warrior battle scene that encompasses the diverse facets to expect when pressing play.

Because the band embrace everything from power metal singalong backgrounds to harmony guitar accents against strong riff combinations, it’s obvious that Triple Kill do live up to their moniker of slaying in multiple ways under the metal classification. Those who love crunchy thrash (a la older Metallica and Heathen) plus stirring heavy metal, and need a soundtrack to send your body into a whirlwind, Age of Rebellion should easily do that trick.