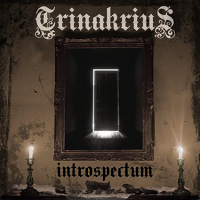 Coming off a largely abysmal, nu metal-flavored album in the form of Seven Songs of the Seven Sins (yikes), Italian doom crew Trinakrius have embarked a face-saving move with the play-it-safe Introspectum. The band makes little or no effort to disguise their influences: Black Sabbath, Candlemass, and Cathedral, and in that order. Therefore, there’s not very much to reach for on Introspectum (the band’s fourth album in a career that goes back to the mid-90s); it’s every bit the immobile, doom-heading album that can be whipped up in a relatively short period of time.

In lieu of the above-mentioned trio, Trinakrius’s Swedish-inspired sound also touches upon the recent works of Memory Garden and Sorcerer, two above-average Swedish doom bands on Metal Blade. While Trinakrius doesn’t have the same kind of allure and/or loft to their compositions (the soft, graceful solo section on “Moments” is easily an album highlight), they prove to be remarkably adherent to the primary tenants of doom. The slow, sloshy “I Would Like,” or the plodding (in slow motion) “Flight of the Eagle” are fundamental passes on the sound, with vocalist Francesco Chiazzese threading his raspy, well-enunciated vocals through familiar corridors.

With Chiazzese being the most interesting aspect of Trinakrius, he isn’t given much to work with. Then again, such are the regular facets of doom of this kind – it’s sometimes rooted too much in simplicity, which for this Italian bunch, appears to be a step up given the drudgery found on their previous album. Split it any way you want, but Introspectum plays it too much by the book, making Trinakrius yet another mopey face in the doom crowd.