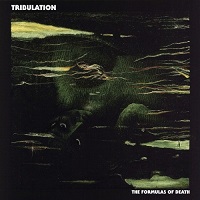 Here’s the formula of death circa 2013 for you: Put in as little effort as possible in creating one’s own sound, and have Left Hand Path on disc speed-dial. If The Formulas of Death is a little side jab on the state of death metal, then good – we need some more irony. Now, this would be lost had Sweden’s Tribulation followed the path (pun intended) heard on their 2009 The Horror debut, which was a simple slab of prone-to-Sunlight death metal. The Formulas of Death, however, doesn’t go down that path. (Last time we’ll use “path,” promise.)

At 76 minutes and an inviting atmosphere to mesh with a loaded riff arsenal, The Formulas of Death sees Tribulation transition away from their core sound. It’s an expansion, not a detour, and the devil is in the details with a lot of these songs. Opener “Vagina Dentata” has an Eastern-feel, one that is existential, but largely heavy. The occult vibe given off on “When the Sky is Black with Devils” is a big winner, like if The Devil’s Blood decided to head over to Morrisound Studios for a session and discovered overdrive. But, this is mostly a progressive death metal affair, with “Beyond the Horror,” “Spectres” and “Spell” amounting to psychedelic, partially tripped-out numbers with an alien feel.

If you scratch the 13-minute long closer “Apparitions” from the running order, the rest of The Formulas of Death ends up being more than enough to bite off and chew from. It’s already one of the year’s ballyhooed albums, which isn’t an immediate stamp of approval, but lots of people seem to be fired up about what Tribulation are doing.