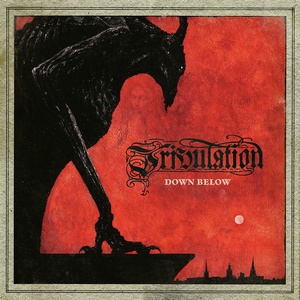 One of the more celebrated acts in recent years, in no small part due to the sonic shifts they displayed with The Formulas of Death and The Children of the Night, which saw the band move into an entirely unique space within the extreme metal scene. But as one continues to carve out their own identity, there comes to a point where those advances don’t have to come at the same speed anymore (nor should they have to).

While Down Below sees Tribulation continuing to expand themselves sonically, it’s not nearly at the rate of the previous material. Given their past successes, this isn’t much of an issue – Down Below sits nicely next to The Children of the Night as a slightly heavier partner. Not to say that the album is soaked in extremity, as it continues on the more gothic passageway that its predecessors paved, along with piano/Mellotron/sound effects and chanting for added weight. Indeed, at this point, the vocals are the only real extreme piece left to the band, though the more direct pathway of Down Below gives it more heft in some ways than Children. What accounts for most of the album then is sharp songwriting. Immediate standouts like “The World” and “Nightbound” see the band at their creative zenith and melding gothic metal, ‘70s prog rock, and drips of extremity into something both hypnotic and totally satisfying. Thankfully there only sits one instrumental this time around, with “Purgatorio” dividing the album in half, though one does question it’s necessity with an already (effectively) truncated overall runtime.

While not really ‘more of the same’ nor a big sonic leap forward, Down Below takes what Tribulation has been doing well with their last two releases, tweaks what works and tries a few things to add to the repertoire. It still contains that melancholic vibe that seems to personify the band, and their unique presence within the scene is bound to be absorbed by many more with the overall strength of this effort.