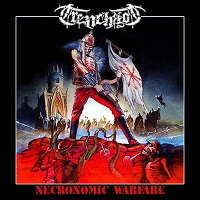 Two rules accompany TrenchRot’s music-making structure: 1.) Play death metal; and 2.) Crush posers. Fair, and noble enough. The death metal rule is non-negotiable, for these Philadelphian dudes have classic-era DM down-pat, evoking the raw offerings of Autopsy, pre-Spiritual Healing Death, and if we want to go broad, the German thrash front featuring Destruction, Kreator, and Sodom. Hardly an inventive mix rolled out on their Necronomic Warfare debut, but when the collective has their hearts in the right place, the pickings are a-plenty.

As is the case with the old-school ethos, the necessary tremolo picking rumbles and barbed wire-swallowed vocals comprise the bulk of the album’s running order. Simplicity is in demand with numbers like opening romper “Death by TrenchRot,” the Bolt Thrower-like “Necrotic Victory,” as well as the paired-down, but jarring punch of “Gustav Gun,” one that reminds of Obituary at their most inspired. The sinister lurch of “Trapped Under Treads,” though, should be considered the album’s high-point. After all, slower death metal generally equates to heavier death metal.

Far more than a back-door entry into the crowded retro death metal playing field, TrenchRot’s Necronomic Warfare is a proper interpretation of a sound that will stay en vogue thanks to the relative ease in which it can be pulled off. And while this has opened the floodgates for lesser bands to come in (i.e. “posers”), TrenchRot are the genuine article.