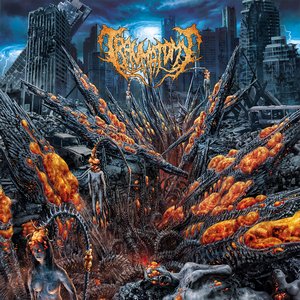 Chances are, upon the combination of name/title, the record label, and artwork for this one, you have a pretty good understanding of what you are getting into. Slamming brutal death metal that takes no prisoners and leaves no ears unharmed. Which is exactly what you are in for with Extirpation Paradigms, but it never dulls the experience in the least.

Pleasantly giving it a solid production (as opposed to caking it in mud like many bands of this ilk do) seems to make all of the difference here with Traumatory. Those familiar with bands like Visceral Digorge or Devourment basically know the drill. Sections of super-fast blasting and chaotic riffs occasionally dip into groovier mid-tempo riffs and the occasional breakdown, all the while in the presence of some very guttural low growls. The formula is far from fresh, but the sound of Traumatory just punches you in the chest. Whether it’s a lurching groove like on “Inducing Intragenic Deformity” or a sludgy breakdown on “Filled with Abhorrence,” the riffs really knock you back. The fast stuff works, but it’s the slower and more menacing riffs that really hold the power, and the band is ever-ready to dole them out at a moment’s notice. It’s the production that gives a slightly stronger tip in the band’s favor, as the crisp sound lets the riffs standout just a bit more and coax the body into a full-on headbang.

There’s no surprises to be had with Extirpation Paradigms, but when it hits this hard, it doesn’t need any. Traumatory have an explosive and violent side to their riffs that make them a joy to listen to, not to mention giving the songs a greater sense of personality – all while attempting to barrel you over as hard as they can.