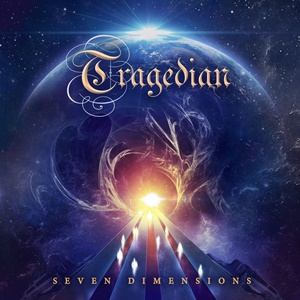 Calling Hamburg, Germany home, it shouldn’t be surprising that Tragedian since their beginnings in 2002 have developed a melodic, speedy brand of power metal. Releasing three previous albums they’ve performed across Europe with acts like Pagan’s Mind, Mob Rules, and Paragon – setting the stage for this fourth studio record Seven Dimensions. The album features nine new songs plus three reworked versions of previously released material – including some guest support from notable metal singers like Zak Stevens and Wade Black – that keeps this quintet on point with fire and force.

Possessing a Venezuelan singer in Joan Pabón, his soaring range resides in similar measures for tone and strength as Tony Kakko from Sonata Arctica, albeit with a few pronunciation challenges for specific English phonetics. Highlights to check out include the triumphant double-kick fueled “Aloneness” as well as the uplifting “Enlightened” when he is able to float effortlessly up and down his register – holding those eagle-like high notes at the end of choruses/verses like no tomorrow. The rhythm guitar/keyboard syncopation at times carries the listener back to prime-time 90’s Blind Guardian on opener “Rising Rage”, while Gamma Ray or Helloween come to mind on the driving “Forevermore”. An area hopefully Tragedian continue to explore is the epic ballad terrain, as “Forces of the Light” as a duet between Joan and Zak takes on a tremendous, cinematic splendor – the choir-oriented chorus breathtaking against the tranquil piano movements and sure to make Savatage / Circle II Circle followers beam. You’ll even get a bluesy Whitesnake/Deep Purple feel when Tragedian choose to go the more straightforward route for their hooks, melodies, and chord choices within “Out of the Dark”.

Many may not be happy with the primitive snare tone that sounds quite synthetic and not as full as you would hope in a band of this style – but it doesn’t diminish the overall high-quality songwriting and obvious talent within the group. Those who pick up the CD version also get two bonus cuts beyond the twelve featuring alternate duet/orchestral versions of the main songs. In the end Seven Dimensions has that ideal melodic power presence for those who love German metal that makes you rise, scream, and shout in glee.