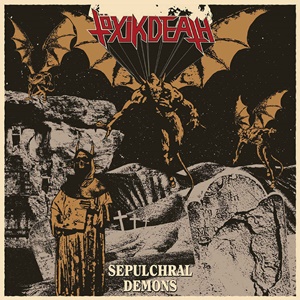 Digging deep into the cauldron of the underground, many enjoy discovering those acts who throw caution to the wind and just unleash primal music of a raw, bestial variety. Norwegian thrash band Töxik Death subscribe to that fist to the face pounding for this second album Sepulchral Demons – a seven-song affair that has a lot in common with the early Canadian, UK, and German scenes when intensity ruled the sonic landscape, adding a bit of that blackened atmosphere in spots that makes the music fierce as well as fearless.

Imagine endless trills against pounding, machine gun like drumming with the occasional rapid-fire tom rolls just to break up the riffs a pinch while adding a cavernous vocal approach where this militant roar keeps up with the music parade. That’s what you’ll get and so much more – including these wild lead breaks that make “Sadistic Sorcery” an easy favorite. Although most of the songs clock in around four-minutes and change, the epic 7:21 “Morbid Divination” contains a slower, drawn out instrumental start that appears very rhythm-driven while the guitars circle in this séance-like manner, switching to some interesting hi-hat/riff symbiosis around the three-minute mark which then elevates the speed into some progressive Sacrifice meets early Destruction moments. These gentlemen live for their metal fast and pummeling with a bit of that dark charm – when Venom were scary, Cyclone was terrorizing, and bands like Sodom, Destruction, and Razor ruled for legions of thrash fans. Bang your head to “Savage Nights”, the rhythms circling their prey as the drumming and bass play never relent and H.H.’s voice mirrors the best punk-oriented thrash mix in the business: tough as nails and taking no prisoners on the path to chaos.

In 2020 it’s great to still hear bands like Töxik Death reminding listeners of the roots of thrash with Sepulchral Demons. Don the bullet belts, your tattered denim vest, and get ready to attack as this record provides your aural antidote to any pain that may be present in your life.