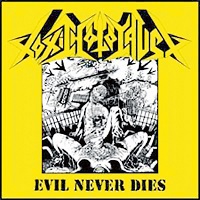 Retro thrash…it’s just the worst. It really is. The pits even. There’s zero validity to any of this stuff and it’s a bit ironic that a style predicated to fight trends is now a huge trend, but such is life and we all must deal with it. Of the handful of bands who aren’t total garbage, Toxic Holocaust (which is pretty much singer/guitarist Joel Grind) have been able to gain popularity and avoid journalistic wrath and are now getting the reissue treatment from Relapse for their 2003 debut, Evil Never Dies.

Grind plays it close to the thrash playbook – like his contemporaries – but where Grind succeeds where others fail in his seemingly endless string of catchy riffs. As put together as some of these songs are (most notably “Enemy of Jesus,” which has a marvelous breakdown), they’re all stocked with Exodus-happy riffs that while certainly derivative, have a certain little something to ‘em that makes TH’s songs have more shelf life than the rest.

Fun, zesty (did we just use that word in relation to thrash? Fuck it, we did) jams like “Damned To Fire,” “Summon the Beast” (love the intro) and “Warfare” aren’t hard to get into. They’re punchy, instantly memorable cuts that demonstrate Grind’s deft, but simple songwriting skills. It would be nice if the rest of the thrash clan would get a clue like this, yet this was a few years before the retro-thrash boom hit and lo and behold, Toxic Holocaust was already out front…