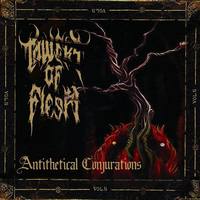 High-level esoteric terms: check. Blackened/deathened hybridized style (for once) leaning on the black metal side of the equation: check. Abyssal incantations that scream for the unknown and embody the many horrors of the mind and beyond? Check. For this British trio the musical course is kind of similar to the path seared by their late countrymen Akercocke, though with a focus on the black metal side of things rather than death but the quality within remaining high. Left-field aesthetics and under the radar, this is one of the better albums you likely won’t hear about all year.

The black/death combination tends to lean heavy on the death with the black serving predominantly as window dressing or at worse, only in the occasional tremolo-run or vocal. Not so here, semi-classic black metal is the template upon which the songs are based, flowing along healthy indulgences in blastbeats (black AND death varieties) whether on true opener ‘Veiled Conception’ or with an even progressive touch on ‘Blind-Worm-Cycle’. The death metal side comes out stronger on the back half of the album but nine minute centerpiece ‘Beg For Absolution’ is the atmospheric trophy-taker, its lengthy closing absolutely suffocating.

A nice mix of many things, the abyssal, black, death, all havens esoteric and mystic mixed together with an unoffensive production and wrapped up in a silky 37 minutes, Antithetical Conjurations is exactly what one expects from an album. Expansive, fluid, and melodic when it needs to be (that closer, ‘Concealed Within’), it’s an album on the radar of far too few. Embrace the dark and Towers of Flesh will reward you.