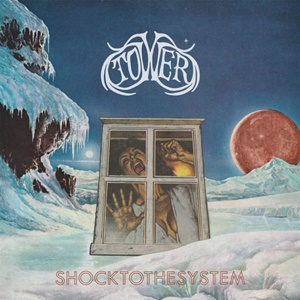 Hailing from New York City, Tower delivers the power and the glory of straight-ahead heavy metal for their second album Shock to the System. The first album in five years for the group, the global pandemic forced creative ways to get the material into shape before hitting the recording studio – as the band only got together once as a collective before heading into Artifact Studio last May/June. Intertwining a mix of classic rock, doom, and thrash beyond the heavy metal foundation of influences, these ten tracks bleed for the cause, the earth-shattering nature of the material evoking the spirit, innocence, and passion of those early pioneers of the movement.

The lightning quick chord progressions and subsequent accents and harmonies pouring forth from the fingers of guitarists James Danzo and Zak Penley gain immediate attention as these gentlemen galvanize the aural landscape in various ways. Creating a Riot meets Iron Maiden-esque buzz through the dazzling instrumental “Metatron” that also features a key thrash-oriented tempo switch near the conclusion, you also get some bluesy Lynyrd Skynyrd/ZZ Top licks against a steady shuffle beat for “Hired Gun” that are instant standouts worthy of repeat playbacks. While most of the songs sit in a comfort zone of three-minutes and change, towards the back half of the record “In Dreams” at almost seven-minutes allows these musicians to create a moving epic arrangement, chock full of longer guitar breaks, moving instrumental sequences that go from quieter, reflective ambience to fist banging madness, along with a stellar vocal performance out of Sarabeth Linden. Lyrically running the spectrum from political concerns, personal loss, and the ups and downs related to life and relationships in general, Sarabeth has that magnificent ability to channel any emotion in the right register, placing her shrieks and screams perfectly while her main delivery is a combination of classic rock and metal professionalism. Check out her work in “Powder Keg” and “Running Out of Time” as she belts these tracks out like Leather Leone meets Doro Pesch in their prime.

US metal is still viable as long as groups like Tower continue to develop the characteristics that put this style on the map. Shock to the System is another lesson in the legacy of this genre – the proper measure of energy, attitude, and killer hooks/songs to match.