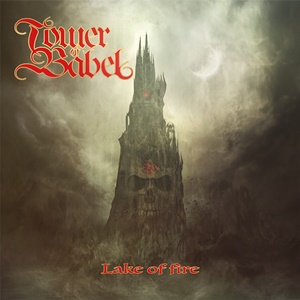 Who needs to live together in the metal landscape today? Proper home recording facilities and internet connectivity allow for ideas and bands/projects to blossom at quicker paces than ever imaginable. Case in point: Tower of Babel for their debut album Lake of Fire. An international act consisting of American and European musicians, most will know guitarist Joe Stump and journeyman drummer Mark Cross (Helloween, Firewind, Metalium on his resume) out of the quintet, rounded out by keyboardist Mistheria, bassist Nic Angileri, and vocalist Csaba Zvekan. As such, it shouldn’t be surprising that based on the musicians on hand, this is a feast for those who love 70’s/80’s influenced melodic hard rock and early power metal with neoclassical touches and majestic vocals.

Joe Stump comes from that Blackmore/Malmsteen school of blitzkrieg arpeggios and bluesy propensities – gaining more than your average eight bar measure lead break right out of the gate on “Dragon Slayer”. The songwriting bounces around from the heads down power riff arrangements that clearly signal a metal stance versus slightly more commercial offerings that are Euro-melodic in the harmonies and hooks, not quite glam but more in line with say Dokken or Leathewolf. Mistheria channels his inner 70’s-organ tones throughout, giving the title cut that evil/soulful mid-range element to keep the guitars galloping and allow Csaba to open up horizons through his multi-octave, Dio meets Mark Boals-like textures. When Tower of Babel choose to ride out a tried and true, verse/chorus template – you get “Addicted”, a literally ‘addictive’ song one could expect from Cinderella or the John Sykes-period of Whitesnake during their Slide It In days.

Knowing as you go into the game the niche musicianship prowess that takes place – there are times where you wish Stump would mix things up a bit more, as the shredding may be a wow factor for some, but could cause many to bail out halfway in an hour-plus, 12-song outing with much of the material hovering in the 5:30 range. He has the capacity of restraint and executing a tasteful solo, as the exquisite “Once Again” conveys that 80’s mid-tempo comfort heard when Blackmore rejoined Deep Purple for Perfect Strangers for another triumphant return to glory. Lake of Fire connects best to people who miss Dio-led Rainbow, Gillian-fueled Deep Purple, and need that singer/guitar magical combination for their power acrobatics.