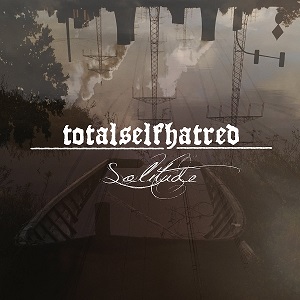 Have at it with the name, “Totalselfhatred,” the Finns clearly of strong mind and intent on leaving nothing to the imagination here. As part of the depressive black metal crop, Totalselfhatred has been conspicuously absent since 2011’s Apocalypse in Your Heart, standing on the sidelines as various forms of “sad” have infiltrated black metal, to varying degrees of success. Apocalypse in Your Heart certainly had its moments, but it pales in comparison to Solitude, an undisputed triumph of the wrist-slitting, black-hearted soul.

Purveying to what amounts to an endless cavalcade of mesmeric chords, quite hazy melodies and sheer despondency, the five songs here are often of heightened value and appearance, finding the band in that ever-elusive spot where black metal ends and sheer emotional (not EMO!) metal begins. The manner in which opener “Solitude MMXIII” glides across the terrain is the first indicator of where this is going, as the band plunges into the furthest most depths with dynamic guitar lines and harsh vocals. The graceful, but urgent “Cold Numbness” continues the thread, working in an array of keyboards to add to the accompaniment.

The album’s highwater mark comes via “Black Infinity,” where, in a way, Totalselfhatred channel The Silent Enigma-era Anathema and funnel it through their own bleak, unforgiving filter. It is, without question, depressive black metal at its finest, particularly when the song heads into its acoustic guitar break at the roughly five-minute mark.

Absence, or even time away from the scene has clearly made Totalselfhatred a formidable entity. There is no dead weight on Solitude, only the sounds of a band who has hit the elusive sweet spot between despair and despondency within the frame of black metal. Few combinations are better.