Grind doesn’t have a great deal of actual characters, save for Napalm Death’s Barney Greenway and the man and band in question, Rich Hoak and Total Fucking Destruction. Hoak, already a grind veteran by way of his work with the newly-reformed Brutal Truth, has kept TFD as his main project, regularly popping out albums along with a fresh political bent worth following.Peace, Love, and Total Fucking Destruction follows suit, with a surprisingly strong production job (this is grind we’re talking about) and some speedy, fun songs.

At 24 songs, Peace, Love, and Total Fucking Destruction goes by fast and really, that’s what grind should do. Hoak’s punky vocals mixed with his constant blasting makes for a frenzied sonic template, one that doesn’t stray too far outside of its comfort roots in songs like “Grindcore Salesman,” “Anyone But Me” and “Youth Apocalypse Right Now.”

The real catch with this album is the production, which runs in direct contrast to the low-fi, DIY production jobs that usually flood the grind market. Hoak’s drums are big, with plenty of low-end to supplement his blast-beats. Not sure if more grind bands will follow suit, but this is one of the more listenable albums of this ilk to come about lately.

Considering the timing of this release and the recent presidential race, Hoak and TFD certainly have something to stand on and Peace, Love, and Total Fucking Destruction, in spite of working within the very limited confines of grind, is worth your ever-so short attention span. These guys make 24 songs sound like a drop in the bucket. 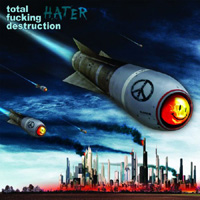