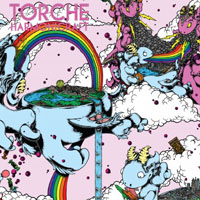 Some bands are just built for summertime listening. Queens of the Stone Age, Deftones [really? – ed.] and, yes you guessed it, Torche. They just fit the mood, making you want to be out in the sun with your friends having a beer and watching the world go by while listening to some upbeat, banging tunes.

Somehow this four-piece of Steve Brooks, Rick Smith, Jonathan Nunez and newbie Andrew Elstner (Riddle of Steel, Tilts) are just able to shoots brightness from their instruments, without ever having to resort to compromising when it comes to quality. They write pop for metal fans and that’s what makes them special. Some of the heft from the long ago Floor days (Brooks’ previous band) remain in the booming bass, and they’re not afraid to rock out with a twisted sludgy riff, so come in, the water’s fine.

Take a look at that album artwork, all clouds and rainbows and slightly sinister things there in the fun. That’s what Harmonicraft sounds like. “Kicking” is a great slab of joy captured in about two and half minutes. It’s this album’s “Across the Shields,” all spacey chorus and ringing cymbals. “Reverse Inverted” is another belter where they find time to indulge in one of those familiar, heads down, sustained wig-outs. Difficult to do in a short song. There’s also something akin to Soundgarden knocking around in the main riff, while the harmonised solo at the end soars and will leave you smiling.

“Snakes Are Charmed” opens with the sort of high-speed, delighted riffing that Adebisi Shank would leap at if it came their way, while “Walk It Off” is a punky little number that Brooks’ voice makes just right. The title track is an instrumental run that’s got train track drums and a great, bright guitar line. If you replaced the six-strings with synths this could almost fit onto the Tron soundtrack. And that’s a good thing. A change in pace arrives in the form of “Solitary Traveller” which is wistful, yet fits the run of the album, while being a breath of something different. Slower than their regular fare the vocals really suit here and it could actually be the best song on the album. But it’s got competition.

Much better than the fairly disappointing EP Songs for Singles from 2010, is Harmonicraft as good as Meanderthal you ask? Hard to tell to be honest. It’s alongside it anyway, jostling for position. Torche have arrived just in time with another beauty to light up your days…now if only it would stop raining.