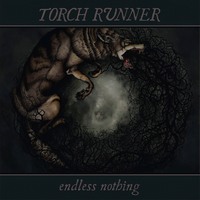 Freely admitting to being drawn in by the cover art, Torch Runner is a band that has not come across my speakers before this release. Endless Nothing is their second full-length effort (and first for Southern Lord); it serves as a fresh kick in the teeth for the uninitiated. This is some filthy grind.

Clicking play, seeing thirteen tracks spread across a mere 22 minutes gave away an instantaneous view of what was about to crawl its way through the sound system. Grindcore, but thankfully a hybrid of which, showcasing some crust, hardcore, and even sludge influences. From beginning to end, there is almost no reprieve from the violence. Gritty and racing guitarwork, pissed off and screaming vocals, and pounding drums come across as the only way grindcore can: relentlessly. So imagine the surprise when the 4-minute plus “Circle of Shit” begins and works as a dirgy, grimy piece of sludge. The riffs bubble instead of popping, and it serves as a nice change of pace from the otherwise speedy tempo. After an crawling 4-minute reprieve, the remainder of the disc goes back to what Torch Runner employ best, ugly crusty grind chock full of attitude.

An abrasive and frantic release for sure, Endless Nothing does serve as a bit of catharsis for one of those days that you just want to toss your TV through the window. Their ability to toss in a crawling element to switch things up is something they should investigate further in the future. Until then, just crack this up and release your fury.