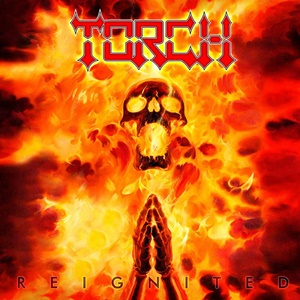 We often know the story of an early 80’s metal band struggling to gain wide acceptance, breaking up, and then reuniting due to renewed interest in those early albums. Such is the case with Torch from Sweden – releasing two albums with their self-titled debut (1983) and Electrikiss the following year (best known for the sexualized cover art) before ending their first run in 1986. A reunion finally occurred in 2013 with four of the five original members (adding second guitarist Hakky to the mix), and after some live gigs they finally hit the studio for this record Reignited.

Not really surprising that these gentlemen subscribe to a basic, traditional formula – throwing down mid-tempo to slightly faster anthem-like efforts, chock-full of catchy riffs and easy on the brain choruses. The sound of a needle dropping on dusted vinyl opens “Knuckle Duster”, a hearty power opener with vocalist Dan Dark reaching for a gritty/sneering template with occasional high pitch note action much like his mentors Rob Halford or Lizzy Borden. It’s probably fair to say the songwriting and performance aspect of Torch has a strong affinity for the Accept back catalog – specific riffs, hooks, and Teutonic-style gang choruses within “All Metal, No Rust” and “Cradle To Grave” possess that swagger to produce synchronized twin axe swings and force that put Restless and Wild through Metal Heart into iconic status. Talk box use during “Snake Charmer” gives this second half cut a bluesy distinction against a solid, four on the floor tempo template, while the longest track “To the Devil His Due” at 7:22 allows the band to explore more musical interplay movements, intertwining a feel of Judas Priest going toe to toe with classic Dokken and Saxon, the restrained aspects during the conclusion with narrative/acoustic embellishment a dynamic twist well appreciated.

Serving up more of what you would expect from a group of musicians who cut their teeth on 70’s influences in the 1980’s, Torch isn’t out to blaze their own trail with jaw-dropping songwriting and blitzkrieg proficiency. Reignited delivers pure metal material and will find favor with many in the community who live for that style.