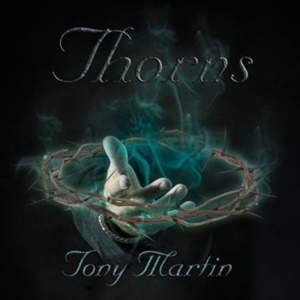 Best known for his work during the mid-1980’s through 1995 as the singer for Black Sabbath, Tony Martin’s abilities have gained acclaim these days from many musicians and fans alike, even if the Ozzy and Dio years were more successful. Establishing himself in other heavy metal/hard rock projects beyond his solo outings, Thorns as the third solo record showcases Tony developing more of his tried and true classic heavy/doom chops with a fine set of musicians supporting him. Intertwining US and European players who have experience in acts like Hammerfall, Jorn, and Venom – these eleven songs position Tony in familiar territory, exploring a crushing style with depth, texture, and dynamics from first note to last.

As a guitarist and co-songwriter Scott McClellan engages his output in that sweet spot between the past and present – injecting much of the mid-tempo and slower riffs with this semi-modern attack that doesn’t diminish the catchy hooks that recall Martin during his Sabbath years along with a bit of angst and aggression. Special nuances pop in throughout the record – be it a children’s narrative sequence for the ending of “Book of Shadows” or guest vocal support from Pamela Moore on the closing semi-acoustic to electric title track endeavor – coloring the album in the shades of atmosphere necessary to captivate and maintain interest, the duet tradeoffs and vocal harmonies sheer brilliance on the latter effort. Folk-oriented instrumentation next to majestic bluesy riffing puts “Damned by You” into that rarified future classic category, Tony reaching deep in his soul for some higher, emotionally driven melodies to match the musical proceedings. Embracing a groovy, playful vibe during the verses of “No Shame”, drummer Danny Needham hits solid 70’s Bonham/Ward mechanics as well as spicing things up through thunderous metal fills, Tony can also showcase his thoughtful, lower register on the follow-up “Nowhere to Fly” – while still hitting those mesmerizing high passages when called to the occasion that send chills even at 64 years young.

Fans of Tony’s work during albums like Headless Cross or Tyr will find Thorns mandatory – and others unfamiliar with this man’s metal voice and songwriting should indeed start here with this record and dive backwards into his vast, premiere discography.