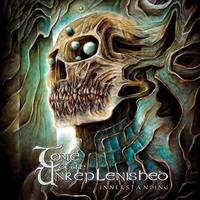 I, Voidhanger Records, out of Italy, is a label that has been putting out some top-quality atmospheric black metal releases from bands such as Mare Cognitum, Chaos Moon and Spectral Lore (all of which are recommended to check out if you haven’t). With bands from South America to North America, and all parts of Europe on its roster, Tome of the Unreplenished is the only band representing the small Mediterranean island country of Cyprus.

Tome of the Unreplenished is the work of sole member Hermes, handling the duties for all instruments and vocals himself. Started in 2012, the first EP was released in 2013 and now follows the debut full-length Innerstanding. While one-man atmo-black metal is pretty commonplace these days, there plenty of solo bands out there who rise to the top of the heap and really shine, regardless of band make-up. Taking into account some of the great ones who fit this description, and the many who fall far short of greatness, this puts Innerstanding respectably in the middle of the pack, with tons of forward momentum, hopefully headed towards a stellar follow-up.

Some of the defining characteristics of the album are the ethereal synthesizer, used in cosmic ways to really enhance that sense of mysterious aura. The melodic guitar, both in tremolo style and in (the best part of the album) memorable, skyward-reaching riffs, serving as the main engine for the songwriting on the album. The drum machine – yes, this became apparent rather quickly that the songs employ a machine for the beats, something that may be a put-off, but if you’re hip to the “scene” then you know that some of the greats such as Blut Aus Nord have used this method with masterful skill and awesome results – so it’s certainly not a deal breaker. The minimal vocals allow the ambiance and guitar to carry the load while, when cropping up here and there, are cavernous and hellish, while other times are used cleanly, as backing layers of melody. A nice length for the outing at about 40 minutes, Innerstanding is comprised by seven songs, two of which are short interlude-type pieces.

Innerstanding is an enjoyable listen, especially if you are into any of the four aforementioned bands in this review. While not yet up to their caliber, all indications point toward capacity for reaching a higher level for Tome of the Unreplenished. A solid debut and a welcome addition to the ever-expanding realm of atmospheric black metal.