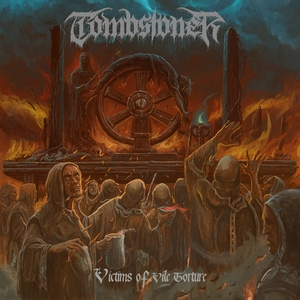 Initially just scanning the name quickly, this one was skipped over due to thinking it was a doomy, stoner act. Turns out, Tombstoner is very much not of that ilk and instead plays some straight up death metal. Following up from their debut EP last year, Victims of Vile Torture is their first full-length, and ushers in plenty of fury for genre fans.

It’s quite evident as the release begins that Tombstoner are a big fan of two things: Cannibal Corpse and groove. There’s a lot in their sound that really harkens back to the early Corpse albums (such as Tomb of the Mutilated or The Bleeding) in terms of the riffing framework and big ole crunchy grooves. Despite the similarity, it doesn’t hold the band back one bit. The ferocious nature of the material, mixed with super catchy grooves, works for a reason and Tombstoner nail it on the head. Nary a track goes by without some memorable riffs coming out of the woodwork, no matter the band’s current velocity. The short but sweet track times (mostly in the 3-4 minute range) keep the momentum going at all times, and allow the more epic “Trepidation,” which ends the album, to stand out a bit more with its emphasis on more chilling and symphonic atmosphere.

Solid meat & potatoes death metal is what Tombstoner brings to the table. Sure, it’s rooted in some familiar territory, but they really grasp the notions of what makes death metal work at its core. Resulting in a furious album that you’ll want to dig into over and over for the sheer fun of it.