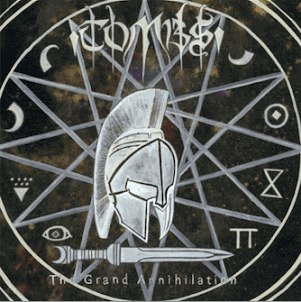 Frankly, nothing Tombs does stands out. They don’t have a gimmick, nor the technical prowess of their peers, they’re not inflammatory in the press, and leader Mike Hill could probably pass you by on the street and you’d have no idea who he was. Somehow, someway though it all, Hill has pushed Tombs to the forefront of underground metal ingenuity, becoming a band that eludes and defies categorization; “an entity onto themselves,” may be the better terminology. While 2014’s Savage Gold was an admirable outing, The Grand Annihilation shows why everyone got so excited about Tombs after 2011’s The Path of Totality in the first place.

We could push the black metal angle here, but Tombs doesn’t come across like a BM band. The way Hill massages his riffs almost feels like the band is trying to take the long way around black metal. They’re certainly speedy and dare we say “angular,” but when saddled between grime-soaked elements on opener “Black Sun Horizon” and standout “Way of the Storm,” Tombs manages to create its own otherworldly dimension. It all ties into Hill’s vast lyrical scope that delves into “destroying the current world to open the door for the new world.” And conceptually, you can gain immersion, like on the brooding “Underneath” and tribal “Walk with Me in Nightmares” where Hill lends his creepy, somewhat Tom G. Warrior-inspired vocal approach.

There’s regular balance across The Grand Annihilation, whether from the aforementioned extreme metal runs to the chord-ringing modes on “Saturnalian.” There’s simply a deluge of ideas and arrangements to take in, none that ever start to feel worn. Whether that’s a product of the song sequencing or Hill’s superior songwriting capabilities, the fact of the matter is The Grand Annihilation may be Tombs’ most definitive statement to date.