Tomb of Finland – Below the Green (Mighty Music) 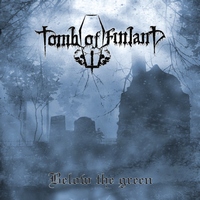 Too often, Stockholm and/or Tampa gets pegged as the designated rip-off sound in death metal. Understandably, the scene’s biggest bands originated from both territories, which cements the obvious notion the most popular bands get aped the most. But what about Finland? The country’s death metal output is typically generalized by bands who started as “pure” (Amorphis, Sentenced, Xysma), then changed their sound for the better (Amorphis, Sentenced, Xysma). The country doesn’t get the homage-wave as much as it should, something the aptly-named Tomb of Finland looks to change on their marvelous Below the Green effort.

Comprised of current and former members of …And Oceans, Charon, Dawn of Relic, and Wolfheart, Tomb of Finland straggles their home country’s noted melodic sensibilities with a depressive air. You can feel it within the mournful pangs of “In the Heart of Winter” (not to be confused with Immortal’s “At the Heart of Winter”) and “Live and Slavery,” the latter of which perfectly captures a sort of wicked cross between triumphant funeral doom and melodic death metal. Elsewhere, the blossoming melodies on “Dead Forever,” coupled with the tried-and-true 90s guitar lines of “The Autumn Rain” further push the album’s accessibility, all the while the vocals of Olli Suvanto oscillate between gnashing growls and whispered cleans.

It’s awfully criminal how much Finland gets the shaft when thinking in terms of the broader influential picture. This scribe in particular thought the wave of Finnish rip-off bands would have happened by now, bit ‘tis not the case. But leave it up to a bunch of well-meaning countrymen to do the job right. Below the Green is a vibrant, but pall-casting album, resonating all of Finland’s direct, depressive blows right to the psyche. Few countries do it better.