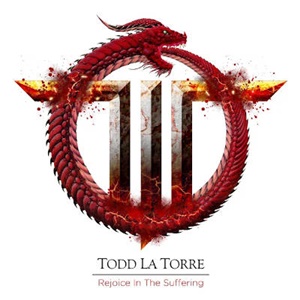 Best known for years as replacing Geoff Tate in Queensrÿche, vocalist Todd La Torre has been hard at work compiling material for his debut solo record Rejoice in the Suffering. Collaborating with longtime friend Craig Blackwell and gaining supplementary support on the mixing/mastering end from Zeuss, these thirteen tracks (ten on the main edition, three bonus cuts for CD/double vinyl versions) probably represent different sides to Todd’s versatility as a musician and songwriter. Still in the metal platform but executing things from often heavier or more diverse perspectives, this record proves the wide-ranging talent at Todd’s disposal.

Early on many of the tracks have a crunchier tone that allows the upper register of Todd to shine – belting out some sinister screams and deeper low range melodic bellowing a la Warrel Dane or Rob Halford especially on winners like “Hellbound and Down” and the follow-up “Darkened Reality”. Craig through his guitar/bass mechanics possesses natural efficiency in his riffs, transitions, and supplementary fluid lead breaks – allowing Todd to shine through his impressive drumming instincts plus adding some guitar play to the proceedings. The atmospheric, clean effects for the power ballad “Crossroads to Insanity” allow Todd to impress through his lower, melodic register during the verses, the song containing some additional twin harmony guitar layers in spots that make this scribe think of everything from Dio-era Black Sabbath to Judas Priest. Most of the songs sharply get their ideas across in succinct four to five- minute windows – but the occasional six-minute arrangement for a track like “Vexed” allows Todd the chance to sprinkle longer instrumental sequences, the acoustic opening and mid-tempo power riff barrage midway through sure to create dynamic excitement for all across the metal spectrum. Todd’s voice remains the standout – clear, multi-faceted, entertaining on all levels from a control and power standpoint. He can rear back for upper reaches during the thrash-like “Vanguards of the Dawn Wall” or be straightforward and tight during the Accept-like “Set It Off” where in spots he lashes out some venomous rage in faster paces, equally successful at his craft.

The best solo work showcases sides of a musician they normally don’t get to engage as much in their main band. Todd lets the listener into some of his traditional and modern influences through Rejoice in the Suffering and issues a platter that could end up hitting many best-of lists for 2021.