Today Is the Day – Pain Is A Warning (Blackmarket Activities) 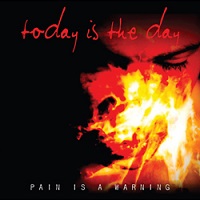 Lots of fight in left in Steve Austin, even after nine albums and several decades into Today Is the Day’s existence. Not even counting the band’s numerous lineup changes, of which for Pain Is A Warning enlists Wetnurse rhythm section of bassist Ryan Jones and drummer Curran Reynolds…it all sounds like Today Is the Day in the end. So consider Pain Is A Warning another triumph.

sink into the mix, TITD spares no aggression, with Austin’s caustic scream volleying between ghastly (see “Wheelin’”) and hushed (“Pain Is A Warning”). Obviously, there’s no shortage of fury here, even on something like “Remember To Forget,” where Austin and co. build up the track then strike like a snake wading through the grass. It’s a time-honored method TITD has kicked around, going all the way back to Temple of the Mourning Star that still works wonderfully today.

Ultimately, the reflective “This Is You” emerges as the highlight here, with Austin strumming along like a lost troubadour, with his rhythm section just along for the ride. It’s a poignant moment amidst some of the more crazed moments here that gives Pain Is A Warning its bearings.

Hard to knock a band (or individual) like Today Is the Day and Steve Austin when they keep getting off the mat and coming back for another round. From this perspective, it always felt like Austin was getting the short end of the stick via the various record companies and lineups he’s had to deal

with, so the aid (and professionalism) of the Wetnurse rhythm section has paid dividends in the form of Pain Is A Warning.