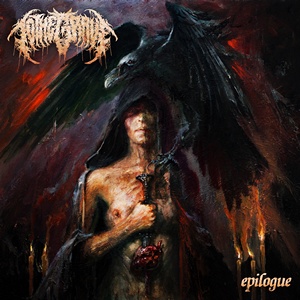 Epilogue operates in some very odd to describe territory in regard to its release. It contains a remixed and remastered version of the band’s 2019 release Global Warning, as well as a total of seven new tracks. So think of it as kind of a new EP with the definitive version of their last release on there for good measure. An interesting tactic for sure, and it makes for a massive amount of material for people to chew through.

To the uninitiated, To The Grave falls under the deathcore banner, with an emphasis on chugs and downtuned riffing to pull a majority of the band’s momentum. To this scribe, the one major difference here with To The Grave is that they don’t make the chugging riffs their only weapon. Many acts in this genre stick almost solely to the slow and chuggy tempos. To The Grave still employs plenty of these ‘hard as nails’ riffs, but they have the courtesy to fluctuate tempo a bit and give the listener some speed runs to generate a larger dynamic. A welcome change, and it is what makes a track like “Recoil in Horror” a stronger one, as it hammers in some blastbeats and frequent tempo shifts in addition to some crushing chugs. Of the new tracks, it’s not a major change up from what was on Global Warning, but you can hear more of this added dynamic at play, and there’s a less predictable switch among the components (see “Terrorist Threat”) – something that the band will continue to expand as they chug ahead. One other important piece to mention is that To The Grave leaves some of the vocal absurdity often found in deathcore behind too. There are some moments that you’d expect, but it never becomes a ‘look how low I can growl without guitars backing me’ competition that becomes a frequent earsore.

If you missed out on Global Warning, you have even more of a reason to check out Epilogue as you are getting a whole lot of material under one release. To The Grave’s deathcore ethos has some stronger foundations than many of their peers, and it’s worth a listen if you are at all intrigued by the sound.